As a finish to the Ice Mile shenanigans, we had a get together last Saturday in Dublin, organised by Fergal Somerville, to receive our certificates of membership to the Ice Swimming Association. A good night was had by all. As can be seen from the picture, we all got the trademark red jacket also

I also met and had a long chat with a true gentleman of long distance swimming, Martin Cullen

And finally, not to let a trip to Dublin go to waste, the following morning (not too early) we went out to Portmarnock for a bit of a dip, not too long, just enough to wash away the cobwebs.

Thanks again to Fergal for doing all the organising here too. It’s great to just turn up and have everything done for you.

Now that the last cold snap seems to have finally left us, maybe now the sea will start to warm up a bit and we can get some “serious” swimming done now !

This post has jumped the queue, but better to do it now, while the iron is hot so to speak. Queue is a generous term. Its a queue of one. My English Channel post is almost there, just haven’t had the pics to supplement it.

Last Sunday, due to the trojan work of Fergal Somerville and John Daly, another chance was given to us to complete the Ice Mile. An Ice mile is a swim of 1 mile in water of 5 degrees C or less. Not for the faint hearted. We had previously attempted this during the last cold spell, about 2 weeks previously, in Dollymount along the Bull Wall, but that time the water temperature wasn’t cold enough. That time it was about 7 degrees. We got in and swam it anyway, but knew it wouldn’t count.

This time, a new venue was decided upon, Lough Dan, up in the Wicklow hills. The weather forecast was cold for the few days leading up to the swim, and as luck would have it,  there was snow the day before. So, as long as the snow wasn’t too bad and we could actually get there, we were almost certainly guaranteed water below 5 deg.

Luckily, only the last few miles were snowy and it was easy enough to get to the lake. We arrived around 9, and went down to have a look. Ice on the waters edge ! Brilliant. A first for me. Water temp measured on the watch left in for a few mins was 2.3. I have this watch calibrated to adjust for the temperature variation caused by heat from my wrist, so you can add about 1 degree to this as a reasonably accurate value. So with a water temp around 3 degrees, the swim is definitely on. 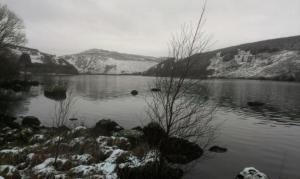 This is definitely a spot that’s worth another visit. So the swim is 1609m, so this was marked out by using the existing pontoon as a start / turn / finish point and swim a straight line course to a marker buoy located 200m away down the lake. This gives a 400m round trip, so 4 laps of this course gives 1600m. Given the pontoon was about 30m away, from the edge of the lake, made up almost an extra 60m, so giving well over the required distance. 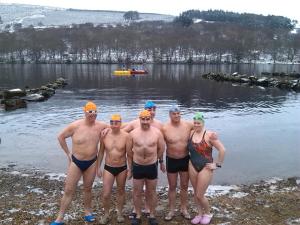 Here’s a video I put together, showing the nitty gritty of the swim.

Some thoughts and observations:

So final thoughts. Bitterly cold, but not as cold as I was expecting. Would I do it again? Definitely. Would I do more than 1 mile? Most likely. I would have definitely managed another 400m at least. How much further? Who knows.

Some things will just have to wait…..

ps. I’ve felt increasing muscular pains, yesterday and today, down both sides / ribs and stomach. Maybe due to the longer bout of shivering?

Thunderbirds have been stood down

Got a call from the pilot to say the swim has been postponed temporarily. The wind has not died down as expected, so the sea conditions are still far from ideal.
Fingers crossed for tomorrow.

I got the call from the pilot this morning to meet @ 2 am tomorrow. Probably in the water by 2:30. So finally, this is it. A big thank you to everyone who helped get me this far. Too many people to mention, but to everyone who swam with me, kayaked, crewed, supported, organized swims, made tea, brought cake and biscuits, gave lifts etc thank you for the support, I owe you all a debt I am more than willing, but unlikely to be able, to repay. It’s now up to me to finish the job.

If we can sort out the onboard IT, updates should be on twitter @soloswimmer, which should be echoed on Facebook.

Here is a link to the boat tracker, hopefully it’ll be on and working.

Here’s a pic taken this morning from the top of the white cliffs of Dover. France visible if you squint hard 🙂 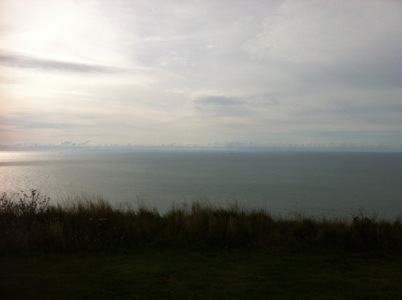 Here is a tribute to Páraic, written by fellow open water swimmer John Tierney, in words much more eloquent than I could ever hope to put together. It is taken from the CSPF website, link below

It was early Sunday morning when I knew that something tragic had happened during someones English Channel swim. I didnt know it was you. Truth be told, I never met you but we were friends in common. If you are an open water swimmer no introduction is necessary, friendship is a given.

Once home after my swim training in my local lake in preparation for my English Channel relay swim, I trawled for news on the internet. In disbelief, I web-searched your name in the hope that it was all a terrible mistake. But sadly, the different spelling of Paraic, the Irish for Patrick, confirmed that a tragedy had occurred with your passing just one kilometre from French soil.

Paraic, you could have been one of any of us swimmers and this is why we know you. We shared your dreams and aspirations. We experienced similar training efforts over the years, pain, illness, fatigue on the negative side. And the many many positives including the pleasant feelings of being in swimming pools or open water, meeting challenges, cutting through waters so cold, and waters quite balmy. And the friendships forged. The warm camaraderie of swimmers based on as little as a two minute chat or reading about Sandycove swimming club or any other swimming location. And now we mourn your sudden loss.

Peering at your winning photo with the floral garlands awarded following a successful Lake Zurich swim, nothing is hinted as to why you passed. Yours was a happy face, a kind visage and clearly displaying the healthy glow of a swimmer. Even at the crest of the heartbreak, your wife Riana had grace in her grief describing you as an amazing, healthy, tough, loving husband, friend, brother, uncle, son, nephew and cousin whose recent passion for swimming brought you to great places.

But dear Paraic, it is a seismic loss to have lost you to the sea. You set off at 09:13 on Saturday 21 July and were taken into the boat around 01:30 on the Sunday morning. Not in vain hope had you trained properly. You had done the miles, in fact over two million metres of swimming in one year under the eyes of many experienced open water swimmers. Six people have previously perished attempting a crossing of the English Channel but theirs had elements of desperation and naivety about them. You had ticked all the boxes with smaller preparatory swims being done in anticipation of meeting the big one- the English Channel.

Your hobbies were not just swimming, for you were also a talented viola player with the Cork Symphony orchestra. You also had a kind eye and were raising funds for St Vincent de Paul and Marymount Hospice. Your nature work educating visitors to Fota island was also part of your warm character. Indeed, lucky are the people who knew you. We may never have met but we are kindred spirits. We miss you, we love you. Rest in Peace Paraic Casey.

Our thoughts are now with your family and friends.

From all the marathon swimmers who feel we knew you but never had the pleasure of meeting you and also those who had the fortune of your company.

“Here be dragons” is a phrase used to denote dangerous or unexplored territories, in imitation of the medieval practice of putting sea serpents and other mythological creatures in uncharted areas of maps.

I have often considered it apt in describing the mental side of marathon swimming. Many people have described a split between the physical and mental side of the sport, with such a percentage mental / physical. Whatever the actual ratio of mental to physical actually is, and it probably varies from person to person, the mental side is definitely a major component and needs to be given the same, if not more care and consideration as the physical.

Given I am now in the last stages of heavy training and doing longer and longer swims, I’m now encountering dragons. Quite often really. These take many forms. Cold, injury, pain and dare I say it: boredom.

The water is still quite cold, especially when the sun is a stranger to these parts. At least in sunshine, there is some degree of heat available, but swimming in sea fog and rain and single digit air temps? That does nothing to raise the water temp. It’s still regularly at 12 deg, occasionally rising to 13. Sometimes you just get tired of finishing every session in a state of mild hypothermia. It hurts, makes sessions much harder and generally just wears you down. Although a recent swim at High Rock in Portmarnock was a welcome break, it was a tropical 14 deg there. Unusual, as up the east coast is typically colder than here. Every little bit helps.

I’ve been largely injury free for most of the winter, the usual shoulder niggles but nothing sinister. This is good. However I’ve noticed a growing pain in my left hip. Most likely a slight imbalance has crept into my stroke, not unusual given the quantity of cold water swimming where muscles don’t exactly do what you tell them to do. Again nothing major, and only really apparant on the longer swims, but at his stage with only 3 weeks to go, it’s probably better not to do anything stupid to make it worse. Tapering begins next week anyway with a switch to some speed work before the ease down. A few pool swims will probably allow me to analyse my stroke and make the necessary corrections.

I came across this quote recently and found it very apt:

For whatever we lose (like a you or a me) it’s always ourselves we find in the sea. -e.e. cummings